How to Break a Bad Habit: 7 Science-Approved Strategies 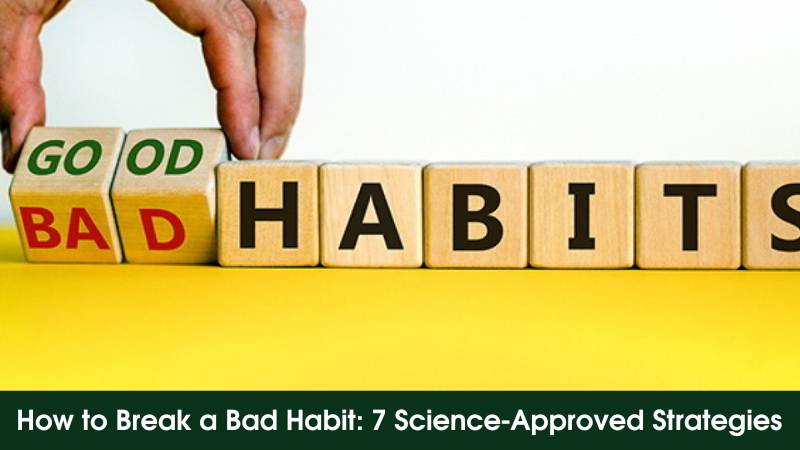 More than 40% of all actions per day we perform automatically. And many of them are not good for us. It seems that getting rid of bad habits is very difficult. But there are secrets that will help you easily break the vicious circle.

Sometimes it seems to you that your whole life is an accumulation of bad habits, and you finally understand that it is time to change everything. Yes, starting tomorrow. You hold on for a while, then you say, “One time doesn’t count.” And then you break.

Try starting small: focus on one habit at a time. Gradually you will be able to get rid of everyone.

Charles Duhigg’s book “The Power of Habit” advises thinking about change as a long-term project. If you try to change all your habits at once, the chances are high that things will get out of control very quickly. Now you may be frustrated by the fact that it will take eight to nine months to get rid of bad habits. But think about what a huge impact this will have on your entire future life. It’s worth taking a month to change one habit. You will benefit from this for the next decades.

You don’t need to radically change your life. Just get rid of one bad habit. Give yourself a month to do this, and then move on to the next one.

In other words, don’t try to quit smoking overnight – try to smoke the same number of cigarettes a day. Or check Facebook no more than your usual 90 times an hour. Such a small effort in time will lead to complete elimination of the habit.

This has been confirmed by experiments. Psychologist Howard Rachlin has shown in his research that by focusing on the persistence of a habit rather than the habit itself, you are more likely to succeed. Smokers who were asked to smoke the same number of cigarettes per day gradually began to smoke less, even if they said they were not going to quit.

If you just pay more attention to numbers, it will lead to big changes. It turned out that counting calories on food labels before eating affects weight loss more than exercise. The subjects who read the ingredient list and counted the calories tended to lose more than those who simply did the exercises. That is, you can get rid of extra pounds even faster if you read labels and do exercises.

You don’t have to deny yourself everything right away. Just pay attention to the numbers and keep acting bad. But be sure to strive for consistency.

Every day I install Instagram on my iphone and every day I delete it. Sounds crazy? Not really. This is the easiest way to check it once a day. I no longer feel like checking Instagram 600 times a day. It takes some effort to download it. And this is another big secret to getting rid of bad habits.

Don’t change yourself. Change context. Habits get us hooked because of environmental triggers. By removing triggers or reducing their impact, you are less likely to be drawn into unwanted behavior. Environment affects health much more than you think.

The environment affects us. According to Dan Ariely, professor of behavioral economics, this is one of the most important discoveries in the social sciences in the last 40 years. If you go to the buffet and the food is arranged in one way, you will eat one. If the food is arranged differently, you will eat differently. We think we make decisions on our own, but to a large extent we are influenced by the environment. That is why we must think about how to change things around us.

Keep what attracts you away from you. Writer Shawn Achor recommends using the 20-second rule. Make your bad habit harder to start, and the chances of you picking it up will be significantly reduced. Watch too much TV? Take the batteries out of the remote control. The 20-second delay it takes for them to return to their seat causes people to turn on the TV less often.

You don’t need to change yourself right now. Change things around you.

What most often pushes you to bad habits? Stress. If you are relaxed, your brain is more likely to make the right decision, say neuroscientists.

Stress weakens the prefrontal cortex, and this part of the brain does not have infinite resources. It can’t be vigilant all the time. While it loses some of its mindfulness due to stress, the striatum kicks in and advises you to drink beer or eat cookies. But if you get rid of stress, then the prefrontal cortex can keep your habits under control.

Don’t pressure yourself. Stay calm and your behavior will change for the better.

When you say the words “I will never…” again, the likelihood that you will do it again increases.

Charles Duhigg, in The Power of Habit, writes that all research on this topic agrees on one thing: bad habits cannot simply be eliminated, but they can be replaced. When you feel an obsessive desire to chew, put in your mouth not a bun, but sugar-free chewing gum. The trigger is the same, the desire is satisfied, but you have replaced the unwanted behavior with a good one.

We know that a habit cannot be uprooted – it must be replaced. And we know that most habits are easy to transform when the golden rule of habit change is applied: if we keep the same trigger and the same reward, the new behavior will become a habit.

Think about what things trigger bad behavior, and then replace your usual response with a new one that will give you a different (but still enjoyable) reward.

A simple plan will help you resist temptation. What do you do before you start a bad habit? For example: “Every time I sit on the couch, I spend an endless amount of time on the Internet.” Now use those two words to make a tiny plan: “If I sit on the couch, then I take a book with me.”

Planning is a really powerful tool that will help you achieve anything from diet and exercise to negotiation and time management. Your chances of success will greatly increase if you think ahead about specific actions to achieve your goal (“If the meeting ends at four o’clock, I will return to the office and make all the scheduled phone calls”).

Just two words – “if” and “then” – open up huge opportunities for you.

Perhaps you broke. It’s okay, it’s normal. Be aware that old habits may return. Treat it as a temporary step back, and not as a reason to abandon everything planned as a whole.

For example, you promised yourself that you would not eat cookies. And then they accidentally ate it. This does not mean that the entire diet is thwarted. The diet will end when you eat one cookie, say, “I give up,” and then crush the rest of the pack.

What do you do when you lose control of yourself? Forgive yourself and move on.

Self-criticism entails a decline in motivation and a decrease in the ability to self-control. It is also one of the main indicators of impending depression. In contrast, being loyal and kind to yourself leads to increased motivation and better self-control.

You are trying to improve your life, and it’s okay if you stumble sometimes.

So, here are the secrets that will help you get rid of bad habits:

This is also a very simple recommendation. Connect with people you want to be like. Do you procrastinate a lot? Spend more time with super productive friends. Do you want to be in shape? Constantly communicate with friends who are obsessed with gyms and healthy eating.

Over time, you pick up the eating habits, lifestyle, and even career aspirations of those you spend time with. If you are in a group of people who set really high goals, you will strive for the same. Conversely, if your friends are not ambitious, then you will lower your own standards.

Now is the time to write to the friend you want to be like and set up a meeting. Friends don’t just make us happier. They help us get better.